Wipe is coming on Thursday with what seems to be some awesome updates for you Bumfuzzlers! In the meantime, I’ve got a bunch of updates ranging in topics from the items blocked after a wipe, to new loyalty levels, bot adjustments and 2 new plugins! Read on!

Originally, after a wipe, I was blocking some of the more advanced guns, but I’ve changed that. No guns are blocked at all now. Then, various explosives were blocked for 36 and 48 hours. I do this only to give a slight delay in raiding. Let’s call it a ‘period of peace’ 🙂

I’m trying to make it so there are loyalty levels within reach for all players and rewards are given out every so often instead of having to wait for 1,000s of loyalty points. Additionally, I think this method will give players an appreciation and an understanding of what they’re getting for their game time.

The second phase of these new loyalty levels are as follows:

In addition, the following changes were made:

Hopefully this adds a more polished element to the way loyalty points are given!

Our favorite horror movie action here has undergone some changes after some feedback. Here’s what was done:

I’m still tinkering with his weapon. The Spas seemed not to work well cause he couldn’t hit anything. The Pistol now is too deadly. It’ll get there.

Been toying with the balance of the bots due to some accuracy comments (thanks WRecKLeSS), but it seems the accuracy is low at 4 out of a possible 10 settings so after some testing with DylanLAF, I decided to change the roam range (the range in which NPCs will follow you and/or engage with you) from 40 to 25. Hopefully this will help.

As is, you’ll automatically get $5 for every 5 minutes you play, but now you’ll get dollars for busting up barrels too. I started out the setting at $10 for every 10 barrels you break. This is just an initial setting as I work out all of this currency setup so I expect it to change.

In the future, I have some interesting plans with currency such as allowing rewards for killing players, animals, etc. I might also give players the ability to rob each other. All of this is in preparation for a store of course that will allow players to purchase various kits, items, commands and so on.

Bounty I fear hasn’t been used much. I have a feeling this is due to it being fully command line with a lack of notifications. Now, we have BountyNET which is part of the same RustNET that works with Remote Turrets, Security Cameras and Search Lights.

Now, if you add a terminal in your base by typing /terminal add when having a laptop, it will give you the ability to access BountyNET where you can put a price on players heads using a very nice graphical user interface. Now people with bounties will be reminded too which is a very nice feature. 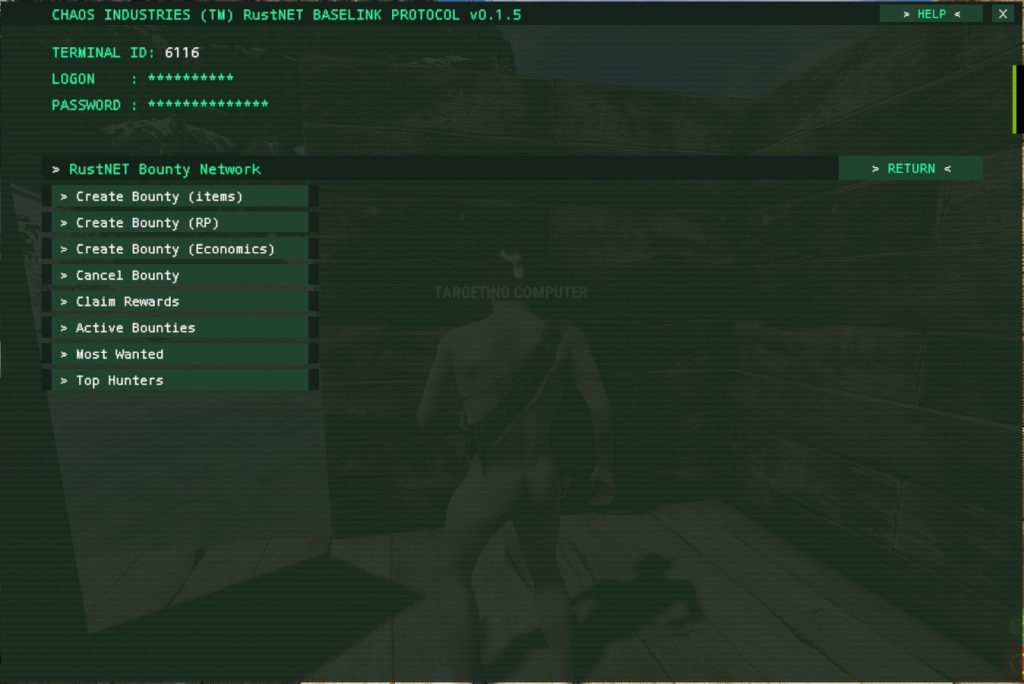 Last, but certainly not least, players have wanted to identify ownership of bases for a while now. Well, I had a moment to revisit it and it should now work. Simply type /prod while looking at an object someone might have built. It will tell you the name of the player it belongs to and if they’re online or not. I hope to extend this functionality in the future, but for now this will do!

Well, more changes are planned as I have time! In the meantime Bumfuzzlers looking forward to the wipe and the new features it brings! Be good! 🙂