Have I got an update for you Bumfuzzlers! 🙂 This one has a lot in it, so take your time, get some raw chicken, toss it on the grill and relax with your pookie bear! 🙂 We’ve got a bunch of fixes, new ways to earn money, buried treasure hunts, Discord integration and more! All of these changes apply to Modtopia unless otherwise stated. Read on!

I view the chat logs as often as I can to understand what is confusing to players and/or what they have questions with and I also take note of questions I receive in other ways. As more explanation can never hurt, I made a couple modifications to the plugin list on the website and also expanded the bot a bit more.

To add additional help for players who may be unsure about commands or simply forget them, I did the following:

Variations of these should work, but as I tweak it, the bot should become more fluid and answer more and more questions.  I would suggest using the word ‘how’ and then a keyword in your sentence. For instance, How do I delete home?, How do I create a home? and How do I set a home?

Apparently /where wasn’t working. I switched plugins and it works now. This one shows the grid and the distance so you can return to the scene of the crime and witness the silliness that most likely had occurred. Thanks for feedback Ron Swanson, ATaXiA, MrNiceGuy, isueIt and others.

I had reports that the grid for the treasure chest event was not reported correctly both when typing /dtd or in the chat message provided when the event started. That should be sorted now and the grid should be reported properly so you can find the goodies! Thanks for feedback ATaXiA.

Previously, accessing /rustnet would not give you much information on what you needed to do and it’s been a peeve of mine for some time. I just hadn’t gotten around to it. I’ve done some modification to give you some instructions on how to get started. Accessing /rustnet will advise you on how to create a terminal and get a terminal ID. Once you setup a terminal and access it to get the terminal ID,  you will see additional help. This one applies to Vanillatopia as well. Thanks isueIt for reporting the need.

The ability to link Remote Turrets to RustNET terminals was problematic in that it simply didn’t work! When typing the /rt command, nothing would happen. Now this is fixed so you can take control over your turrets to mow down those pesky chickens! 🙂 Thanks for feedback isueIt.

There was a very strange issue that would come after taking control of a remote searchlight through a RustNET terminal. After disconnecting from the remote searchlight, everything would seem normal, but you couldn’t build and sometimes you could even experience random damage as if you were being burned or stuck on a barbed barricade! This wouldn’t affect anyone but you so the rest of the server would be fine. Restarting the server is the only thing that would fix the issue.

It turns out this seems to be a conflict with the Proximity Alert plugin – the plugin that allows you to be alerted about the presence of another player or NPC within a given distance. For now, since the /prox plugin has some issues, I’ve disabled it. I’ll look into it’s issues in the future, but I can’t promise anything 🙁 Thanks for feedback on this problem isueIt.

It’s been tame for a while. I’d like to see a little more raiding going on and it seems a few of you would also. A semi-problem is lots of you regular Bumfuzzlers are friendly with each other and are hesitant to raid one another. That must stop! Jk 🙂 Fine, be friends! That’s great! I’ll just remove the guilt from raiding!

From now on, I’m going to make it more difficult for you to know whose bases are whose. This way when you raid someone, you can’t really feel guilty since you didn’t know it was your friend’s base! When your friend screams they were raided, just tell them you didn’t know! or show genuine concern and vow to track down the person who did it! Revel in the excitement of barging into some unknown person’s house only to find your friend sleeping by the fireplace! Doh!

What does this mean? It means /prod was short lived and the raid notes you see in chat when someone is raiding are going away! I want to add back some of the mystery and secrecy about raiding and being able to see base ownership doesn’t allow for that.

Raid! Be free! Be careless! No worries about hurting feelings! 🙂 You didn’t know who’s base it was! 😉 It wasn’t your fault!

It turns out after the wipe, I missed resetting kit usage so if you used a kit toward the end of the previous wipe, you may not have been able to use it this wipe due to the cooldown. I’ve gone ahead and reset the kits so this should no longer be the issue. Some of you may get a free kit use, enjoy! Thanks to WRecKLeSS for the heads up!

As I posted last, I removed any of the kits from the website store that might be considered pay to win. It turns out I forgot to remove those kits from /kit in-game. Thanks to isueIt for pointing that out. I’ve now removed those kits.

We have a new Discord event which will provide players with the chance to claim dollars towards their economic balance! The event runs at a random times (usually within the hour) and also provides a random amount of money each time. When it runs, you’ll see messages similar to the messages below.

Here’s what you see in Rust:

Here’s what you see in Discord:

In the example, you would copy the text /get <code> and then paste it into the chat in game. In this case, by using the command posted in Discord, players would receive 157 dollars in currency! Just hang out in Discord and rake in the dough! Just keep in mind only the first 3 players get the reward so you have to hurry!

The link for Discord is always on the right at the front page, but here it is for convenience – https://discord.gg/37uNKRX

Since I enabled it yesterday isueIt is raking in the cash! I see him in Discord grabbing every cent! 🙂 Best to be quick!

In keeping with the idea of expanding Discord functionality, I’ve implemented the ability for players to communicate with Discord from inside the game. This can be extremely helpful because wherever I am, I get messages on my phone via the Discord app. This means if you need to get in touch with me, you can do use Discord itself or you can be lazy and do it from chat in Rust. Obviously consider I do work so my response time can vary, but at least I’ll know about it at some point – sometimes Steam has  away of losing messages.

So what can you do? Two major things:

I’ve given everyone access to these commands and as long as it’s not abused, it’ll stay that way. I urge you to use them in order to communicate with me (and Discord).

This one should be a lot of fun! Find treasure maps that lead to treasure and gold coins you can cash in for dollars! The treasures can be on land or under water!

When you find a map, simply set it as the active item in your tool belt, type /markmap or right-click (the later seems a little buggy at the moment). The map will be removed from your inventory, you’ll get a message about the grid location in chat where you can find your buried treasure, and the default Rust map (key ‘G’) shows an explosion icon in the specified grid only the map wielding player can see.

Once you get within 5 meters or so, you’ll get an announcement that the loot is nearby and the explosion map icon will be removed. Now you can open loot and take the booty! You may gain new maps from the treasure or even get gold coins!

If you receive gold coins, simply set them as the active item, type /sellgold or right-click (again the later seems buggy right now). You will automatically gain dollars towards your economic balance that you can use in the store.

TIP: DO NOT THROW MAPS OR GOLD COINS ON GROUND! You cannot pick them back up. You can however loot them and store them, give them to others just fine.

Also, note that maps come in 4 rarity flavors as you can see in the picture below. 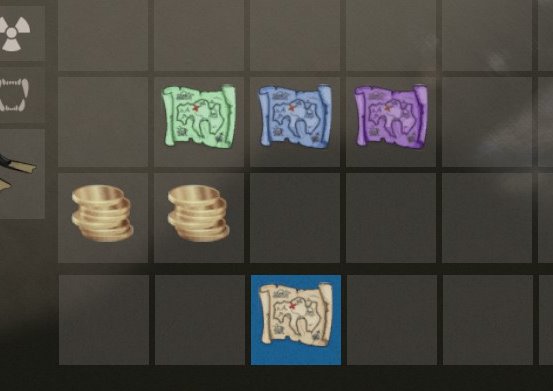 Maps will spawn throughout the world in crates and boxes!

If you have any trouble remembering any of this in game, you can type /treasurehelp or !buried or “How does buried treasure work?”, etc.

Modtopia will be wiping on Thursday 5/24, but Vanillatopia will get a pass until 6/7. I want to see how things go this next cycle, but there’s a chance I may do two things:

Phew! I think for right now that’s all I’m going to say 🙂 I hope you Bumfuzzlers have fun and please as always please provide me with feedback. You can catch me in Steam, Discord or our forums!